So, there has been more than 2 years since the last time I blogged, for a dozen different reasons. First, I had to finish my master’s thesis, while stressing over whether to look for a job or continue my studies. Then, all of a sudden, I got my dream job! Just out of the blue! I now work for the museum where I’ve had my summer jobs since 2013, spreading history goodness to the masses.

The new job meant I had to move. I moved in with my mother for a while, until I knew whether the position at the museum would be a permanent one or not. When I got the job permanently, my boyfriend and I began looking for somewhere to live, moving from the western coast to the eastern inland of Norway. We bought an apartment in February, moved in towards the end of March. For the first time in my life, I have a proper workplace, and room for all my costumes and sewing supplies!

I have made a lot since February 2016. I have not got pictures of half of it. Whatever blogging-habit I ever had, I’ve lost, and with it went any motivation to photograph and document my costumes. However, I’m doing more serious sewing than ever before, I’ve got myself my own, separate instagram account only for costumes and sewing (pettiswash! Look me up!), and I am slowly getting back into the sharing and caring thing.

Now, on to some of the stuff I’ve made since last time I blogged! (something along the lines of 95% of the photos are not by me, but by skilled friends) 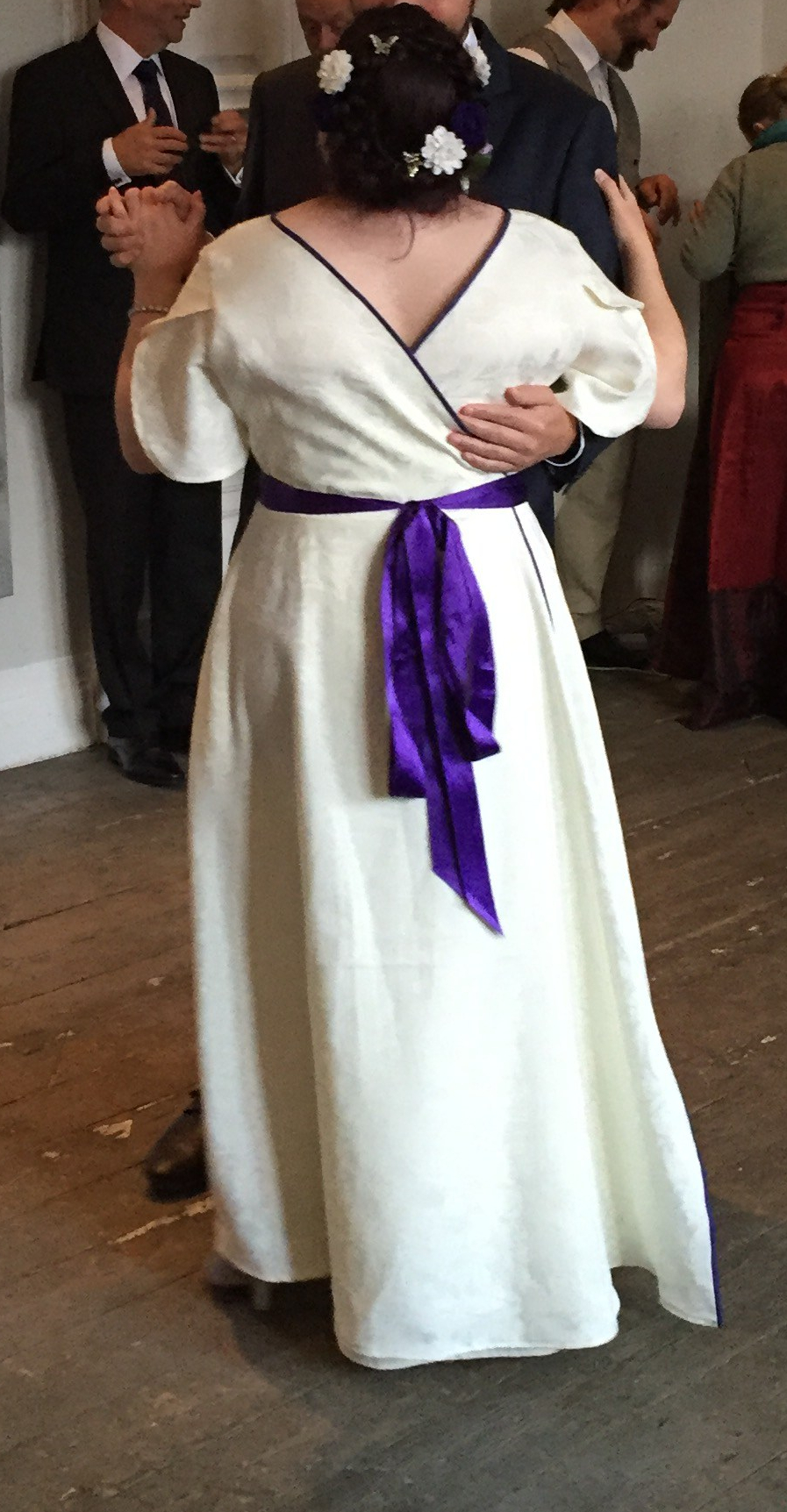 No, not mine! But my lovely, amazing, fantastic friend Karin asked me to make her wedding dress, and I couldn’t very well refuse, could I? We had such a nice time constructing it, making all decisions together, from the fabric to the shape to the length of the sleeves. It’s made from a fine, offwhite polyester satin brocade, and is sewn as a wrap dress, but with back instead of front wrapping. A lovely dress for a lovely lady and her lovely day!

This was so much fun! I made this for a larp set in late 18th century Norway, where I played a dirt poor young woman. I have made a lot of dresses as pretty as possible, but never as messy, dirty and ragged as possible, and it was such great fun! I think I’ll do a distressing post one of these days, It was such a fun thing to do.

Victorian Bureaucrat in the woods:

Another larp, another costume. I played a bureaucratic royal advisor, and so decided to wear discreet greys and whites and blacks. I knew I was going to be running around in the woods, conversing with supernatural creatures, so I wanted my costume to be practical, but still very professional-looking. I ended up taking inspiration from this archery jacket from 1850 (the year the larp was set to):

I made a jacket, similar to this one, with flared sleeves and heaploads of buttons, from grey wool. Then I made a simple grey skirt and grey bodice, and used the white garibaldi blouse I made in 2014. The bowler hat is from H&M, the gloves from Accessorize, and the bag and suitcase are things I’ve inherited or borrowed from my mother and my mother-in-law. Photos by Tim Esborn.

Here, we’re moving into the realm of “I made lots of costumes, but never took the time to photograph them”. I played a French lady’s maid/companion at a larp set in the 1890s, and made myself two day/work outfits and three evening gowns, all made from black satin and lace and looking awesome! However, I was never really there when anyone took pictures during the larp, as I was too busy in the kitchens, or helping the ladies with their hair and their gowns… Photos by Eskil Saatvedt.

I’ve used a couple of the evening dresses later, for a Halloween-thing at work. Please excuse the blood: 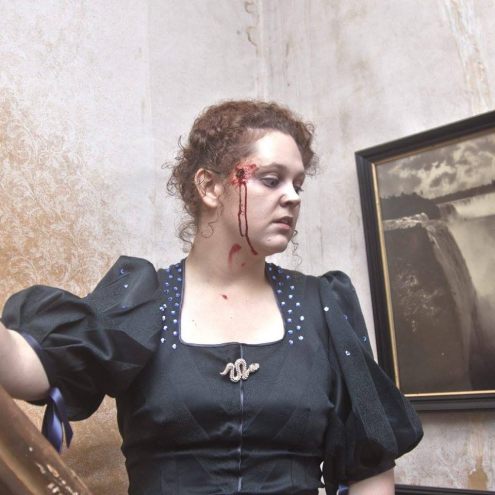 Same 18th century girl as before, but she’s come up in the world. This time around, she was employed by the local vicar, and was given new clothing. Linen chemise and petticoat, woollen skirt, woollen jacket and a linen apron. So crisp! So clean! So much in love with her employer! Photo by Hanne Eik Pilskog.

Celebrating Christmas – Victorian style! I loved this costume, so comfy and sleek! Cotton bodice and cotton skirt with flounce, over petticoats and chemise and stockings and corset and the works. Add crisp white (removable) cuffs and collars, a starched apron and a small lace cap, and you’ve got yourself a nice housekeeper. I even made myself a small chatelaine for my scissors and watch! I made a checkered dress for the fancy christmas dinner too, but that has not been photographed. Photo by Eskil Saatvedt.

Long story short: my young woman character married her beloved employer, but didn’t really get much of a happy ending. However, she got a great frock! I made this from wool, decorated with colourful ribbons and black velvet. Complete with loose, white cuffs and a stomacher. 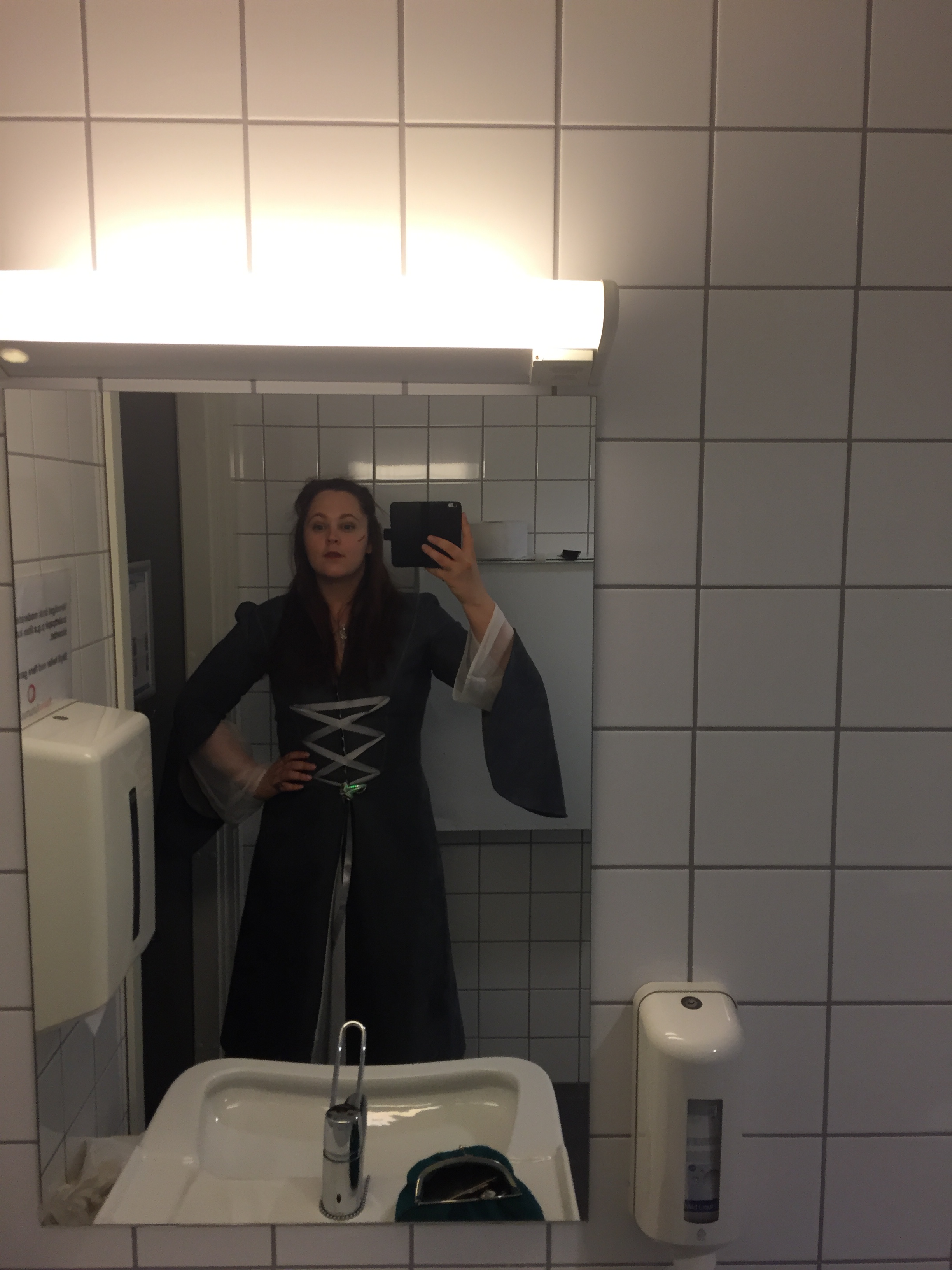 Made in approximately no time because my boyfriend and I were asked to do a swordfighting show before a massive The Lord of the Rings-marathon at the cinema in Åndalsnes in Norway. This is literally the only picture I have of it, which is sad, because it’s actually a really nice costume! Maybe I’ll take it out and photograph it better one day?

So, I attended a larp, set in the USA in 1958. Celebrating the 4th of July at a posh boarding school. My character was a bit of a rebel, a wannabe pop star – and the leader of the girl gang “The Cherry Girls”, so obviously I had to make a party dress covered in cherries… So much fun! Photos by Tim Esborn and Geir Harald Helgeid.

New larp, new wardrobe! This time around, I made three dresses for a young, wealthy woman in Norway, 1829. I made one white dress, based on the white dress on this site, and one blue satin one, and both can be seen above, however the final dress, a yellow cotton one, I have no pictures of. I also made a corded petticoat, corded stays, chemise, petticoats and a lot of other little bits. Photography by Martin Lindelien. 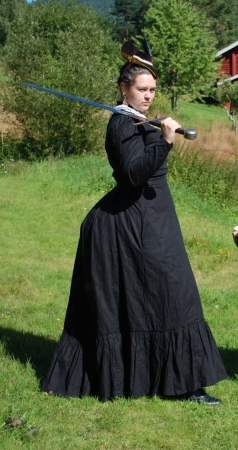 … or, as I like to call it, Cultural Appropriation 101. New larp! I played an aging Indian woman, married to a wealthy Scottish baron. I bought kilts and sarees on Ebay and constructed my costumes from that. I am pretty happy with the results! The glorious hat is not my creation, but that of my amazing friend Johanne. Photo by Eskil Saatvedt. 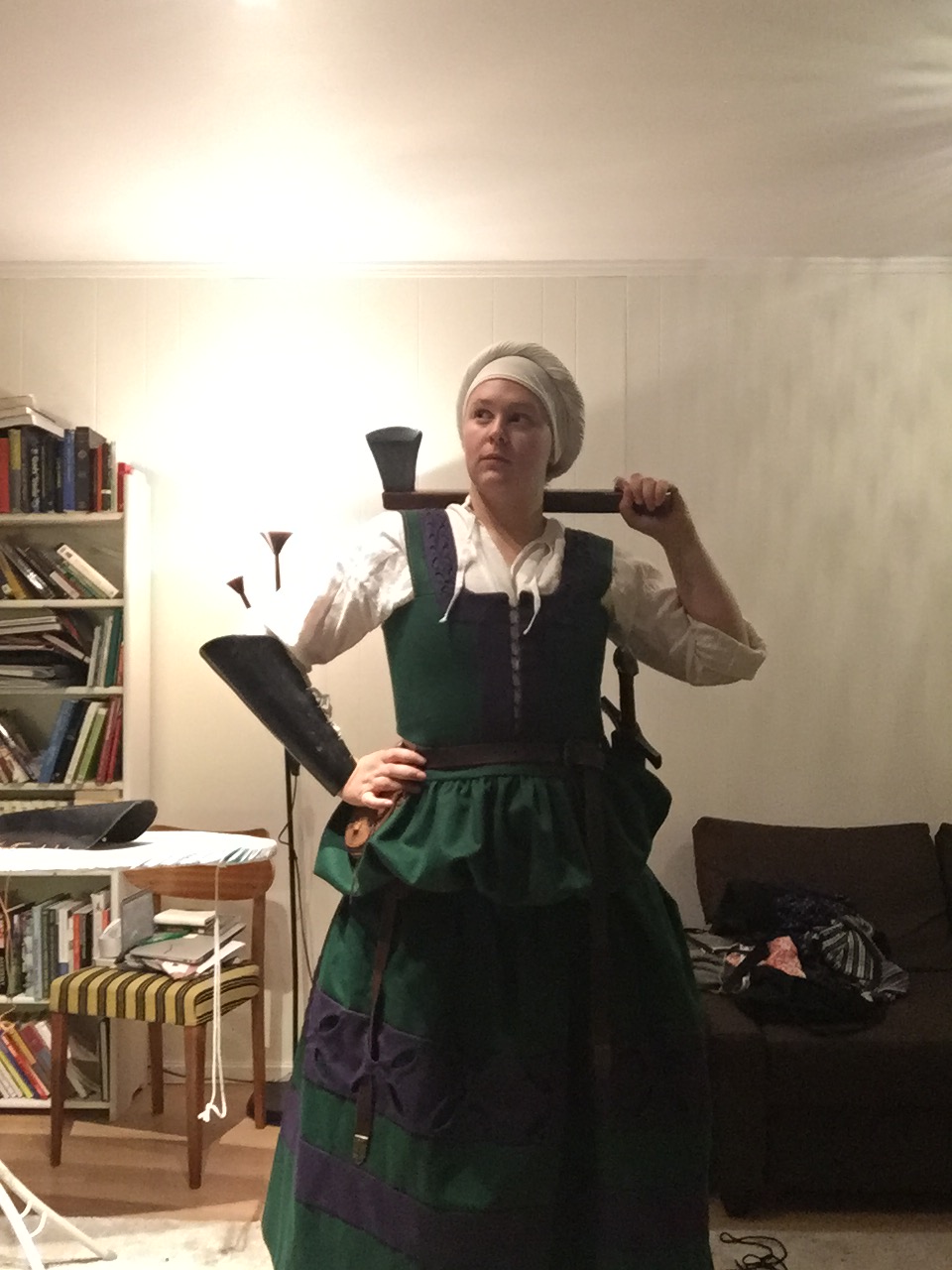 Excuse the messy background! I’ll definitely get better pictures of this soon, because I love this dress. Green and purple wool, boned bodice and lots of volume goodness in that skirt. 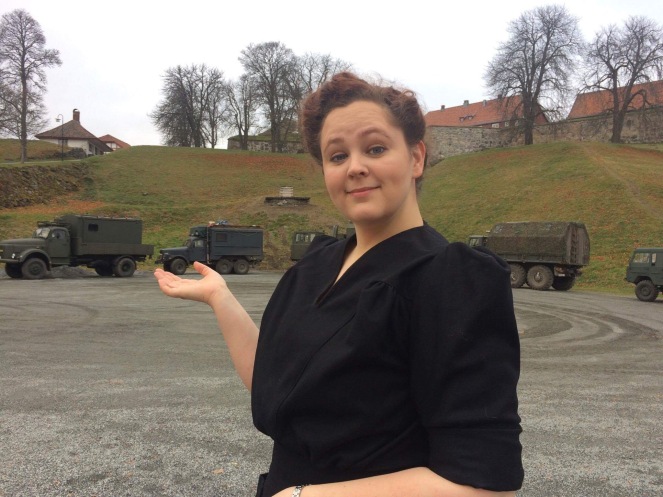 Shaaaaaaame on me. I participated in an AMAZING larp, callen 1942, and set in 1942, in a small Norwegian fishing village during the German occupation of World War II. I made so much stuff! I made stockings, garter vest, chemise, drawers, work dress (as seen on the photo), fancy dress, day dresses, apron dresses, and even a coat! I need to do some sort of photoshoot with this one of these days, because they were so pretty, but I only have this to share right now. Photo by Bjørn Sverre Hol Haugen.

Of which I have NO PICTURES. Which is horrible. I have to do something about that one day. But long story short: A colleague of mine gave (!) me a bodice from around 1900, and I tried to recreate it for a christmas reenactment event in December.

Made in a hurry, from pretty stripey polyester satin. Photo by Kristine Grønningsæter. 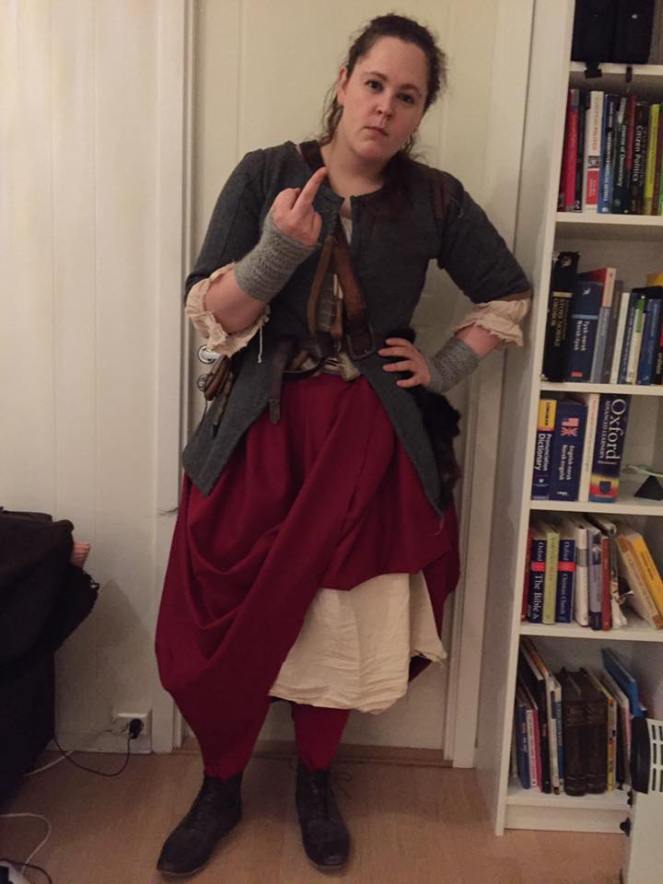 Is this my new thing, perhaps? Ragged Georgian and Domestic Victorian? This was also for a larp. I used some old bits from my last ragged costume, the only really new thing was the skirt (my character belonged to a village where we were all supposed to wear red). Excuse the rude hand gesture, but she just wasn’t very nice. 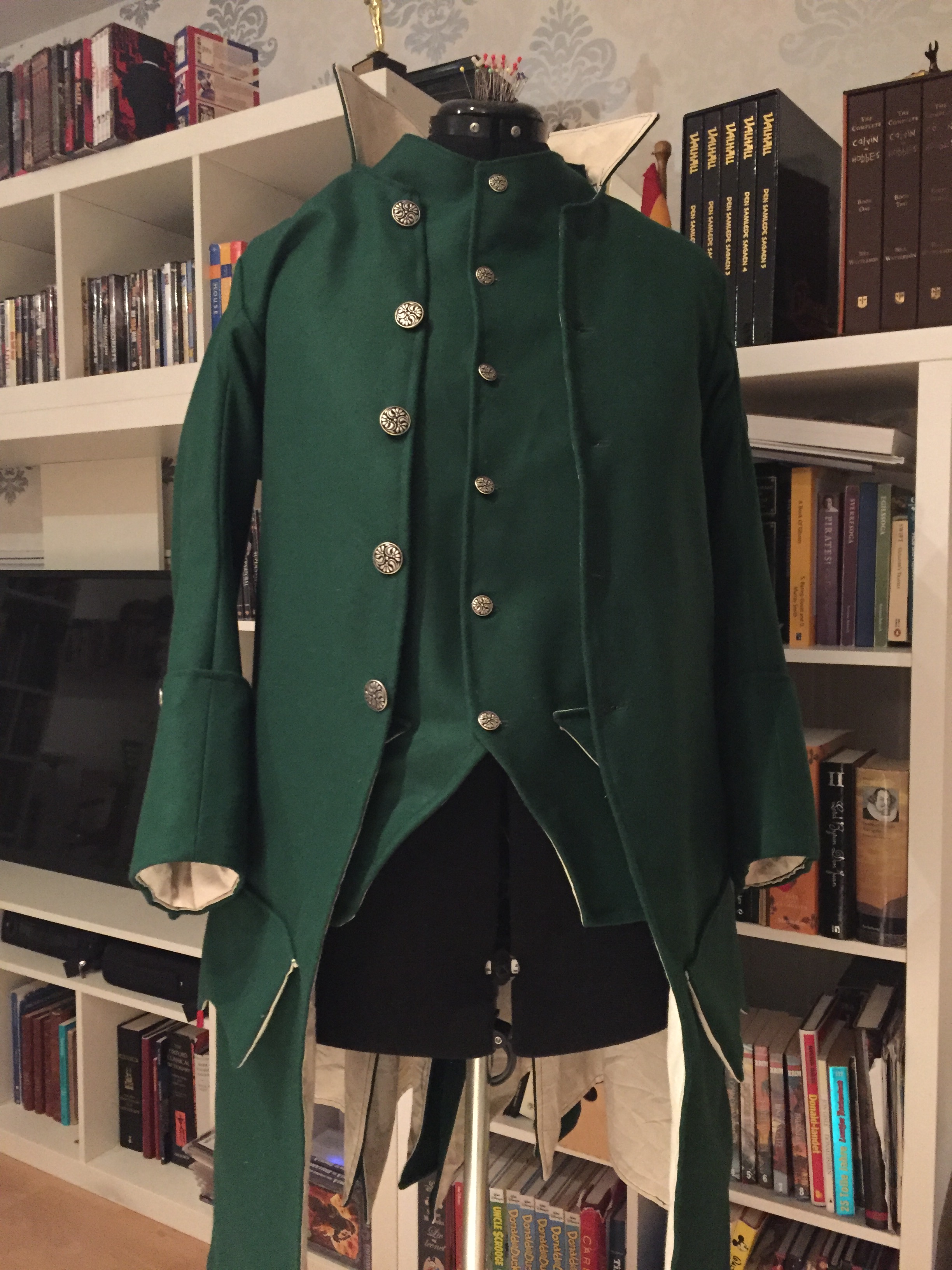 Made for a friend. Green wool, lined with uncoloured cotton. I made a shirt too, and I was going to make breeches, but ran out of time. I will make them later, the next time he needs an 18th century costume.

This was such a fun project! Maybe I’ll make a more thorough blog about it one day. Made from red cotton velvet, lined in black satin, and complete with cape-turned-train.

This is some of the things I’ve made since I last blogged. Hopefully it won’t be 2 years and 3 months until my next post…

How pleasing are these #cartridgepleats ?! I just find this so relaxing 😅 dabbling in a bit of #victorian #sewing these days, creating a bit of #variety in my hobby 😊❤️
I’ve made a thing! The @redthreaded gored #1860s #corset - and it’s so pretty and comfy! I got my supplies from @historiskmote 🤩❤️ go check it out! I’m especially on love with the little hook 😍
So, I haven’t been super active on Instagram lately, and that is partly thanks to my new little assistant! This is Melvin, he loves food and cuddles and is cooler than I’ll ever be 😻
Good thing I love #cloaks - Mrs. Bamford surely did! I’ve made another cloak, and another #video 💙 link to my #youtube in my bio!
Today, I’ve tried #flossing a #corset for the first time! So much fun, but surprisingly hard work! I’m really happy with the result, what do you think?
New video up on YouTube! I made what was supposed to be a #georgian “fart jacket” but ended up feeling more like a pirate 😁