So, I had a little photo shoot with my darling (patient and luckily quite childish) mother, and here are the results! I also did my hair and makeup to the best of my abilities… 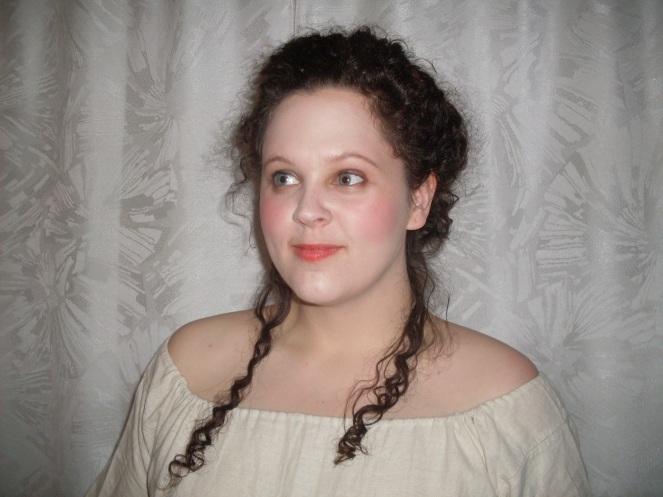 18th century cosmetics consisted mainly of two different products: Blanc (white powder, often made up with lead or mercury, and hence really really deadly) and rouge (red powder, sometimes mixed with fat to make a lipstick-like product, and which was often made up with the same really really deadly stuff as the blanc). Seeing as I love life and don’t want to shuffle off this mortal coil due to heavy metal poisoning any time soon, I chose to use modern equivalents: very light powder foundation and a brick red lipstick. After having powdered my face, neck, ears and shoulders (even though I was already pretty pale), I rubbed some lipstick onto my cheeks, my lips and my eyelids (red eyeshadow was ALL THE RANGE in the 18th century).

I am blessed with a very 18th century friendly hair. I basically just piled all of it, except a couple of strands at the nape of the neck, and pinned it to my scalp. Maybe I’ll go full beauty blogger one day and make a hair tutorial? If I have the time. And if I manage to keep my arms up for that long. And if people are interested in a tutorial from a spoiled brat with the natural equivalent of velcro on her head.

Of course, I would have preferred to have waited until I was dressed before putting my makeup on, however, I didn’t have time. So, please, forgive my increasingly messy look as the shoot progresses…

’nuff said! Time for some lingerie! 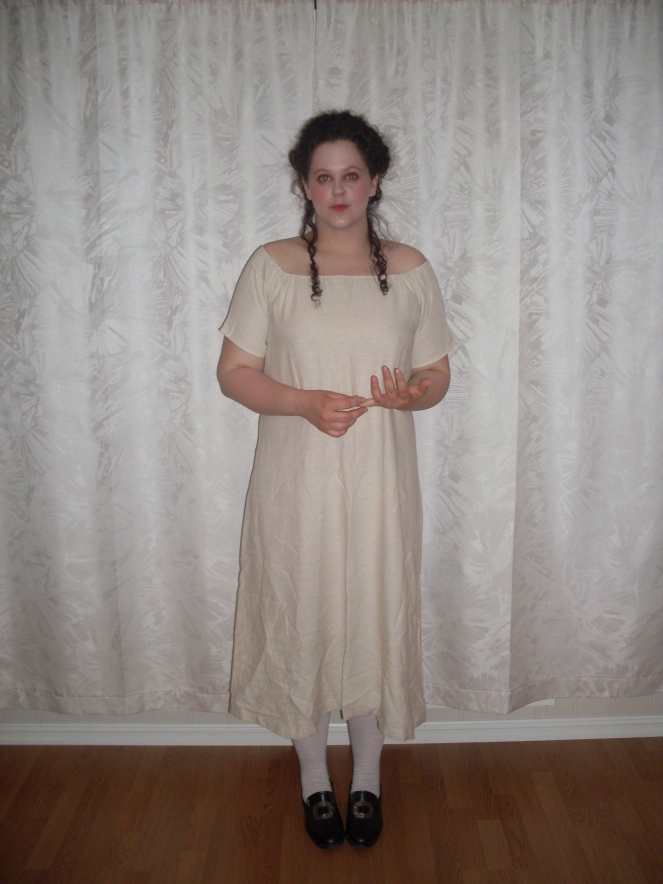 Chemise, stockings and shoes. The stockings and the chemise you’ve seen before (here and here). I am SO LUCKY to be living in Norway. We have rococo-inspired national costumes galore, complete with shoes that strongly resemble the shoes worn in the 18th century. You can get them really cheap too, and especially if you buy them in the first part of May. Mine are really comfortable, and I spend entire weeks living in them. 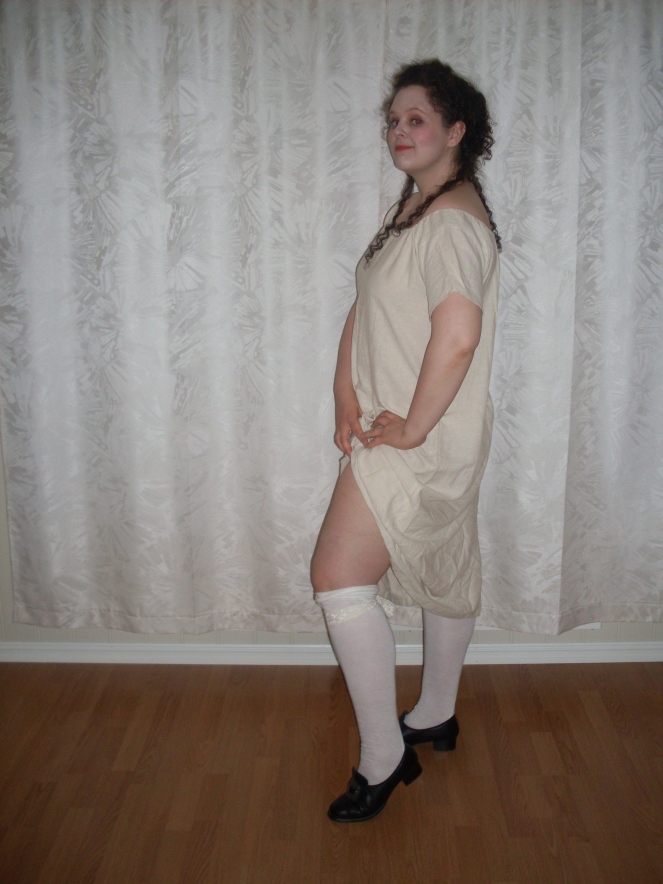 The stockings, here displayed in the most risqué way possible. As I don’t want them hanging around my ancles after two minutes (and that’s being generous), I keep them up with garters. My garters are just ribbons of elasticated lace. Not historically correct, perhams (they had some sort of elastics, though it was mechanical and metal-based, not made of rubber). However, lace is never wrong! 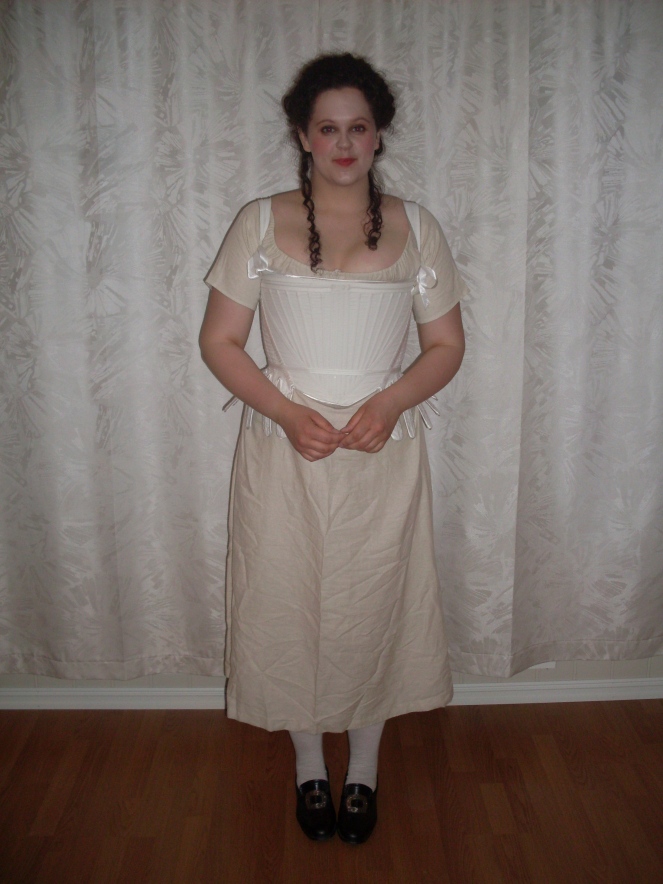 My stays are on! You can read more about that particular garment here… 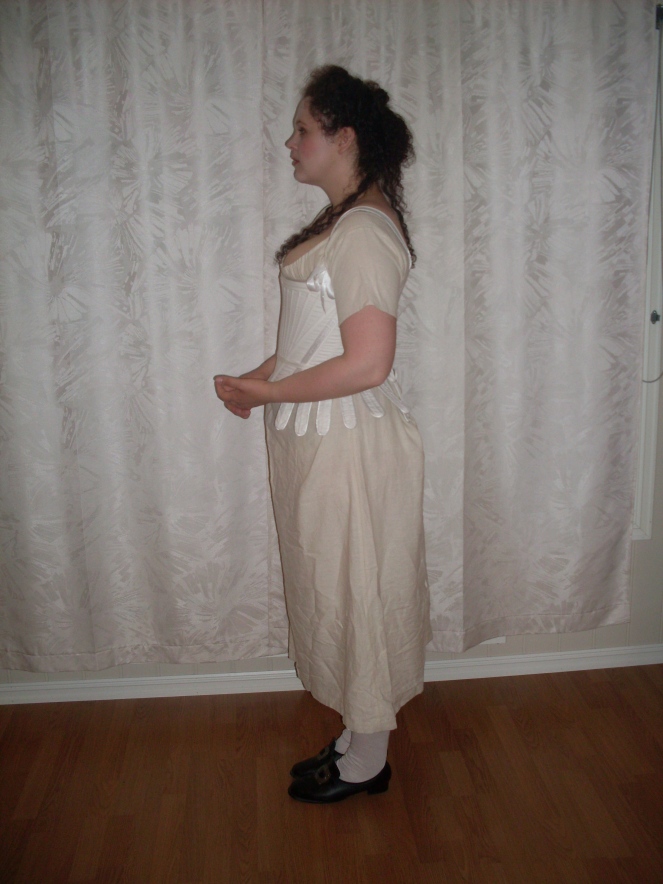 Seen from the side… 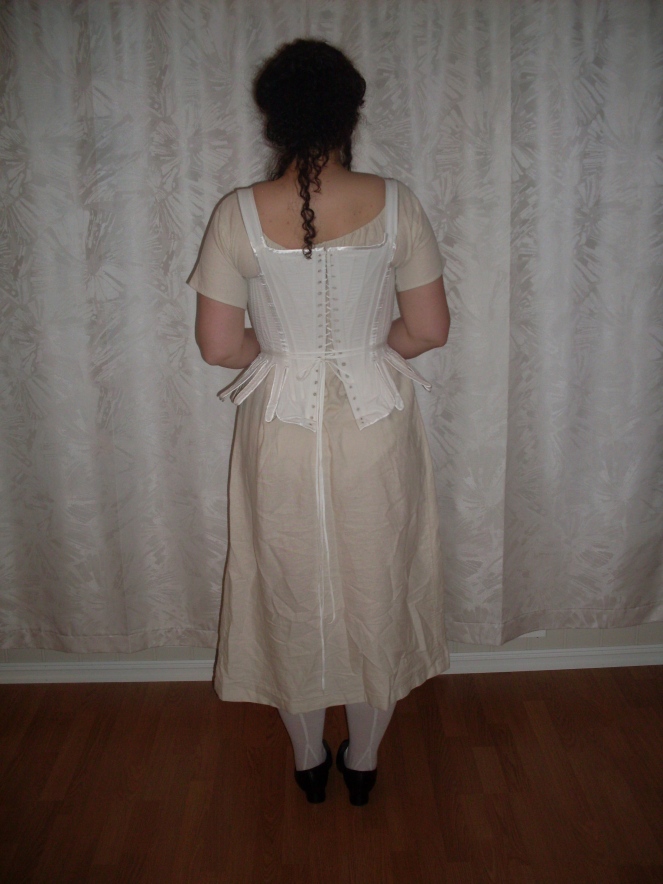 … and the back. I haven’t pulled my chemise down evenly here, which makes it appear wonky. Luckily, it isn’t really, it’s a very comfortable piece of supportive clothing! 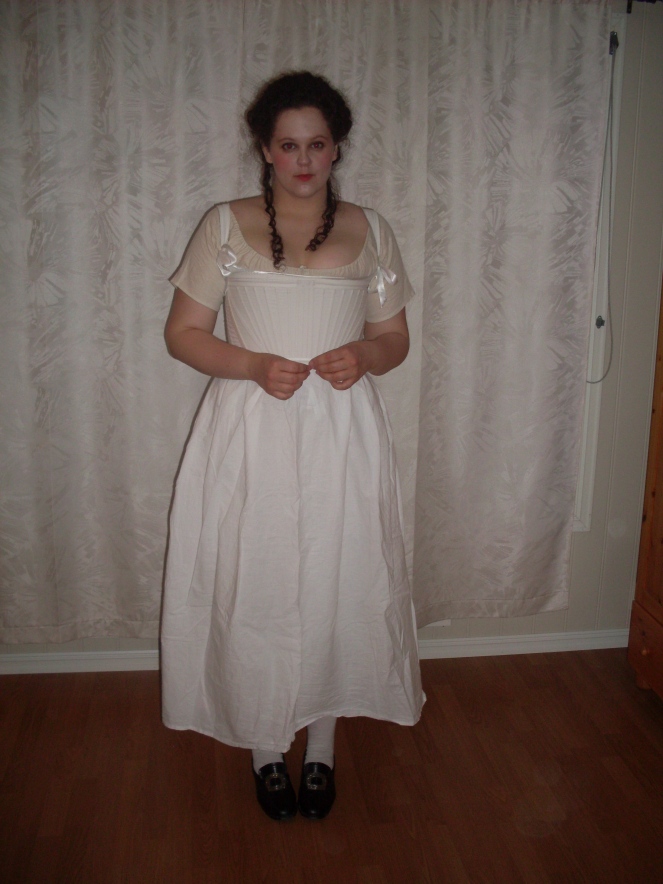 Petticoat number one is on (but needs ironing and starching)! 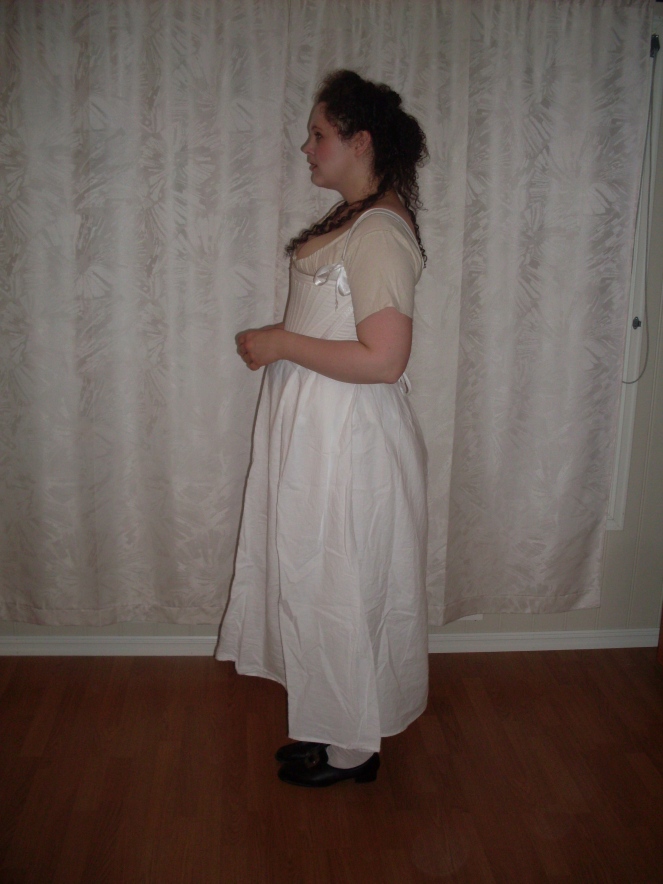 View from the side… 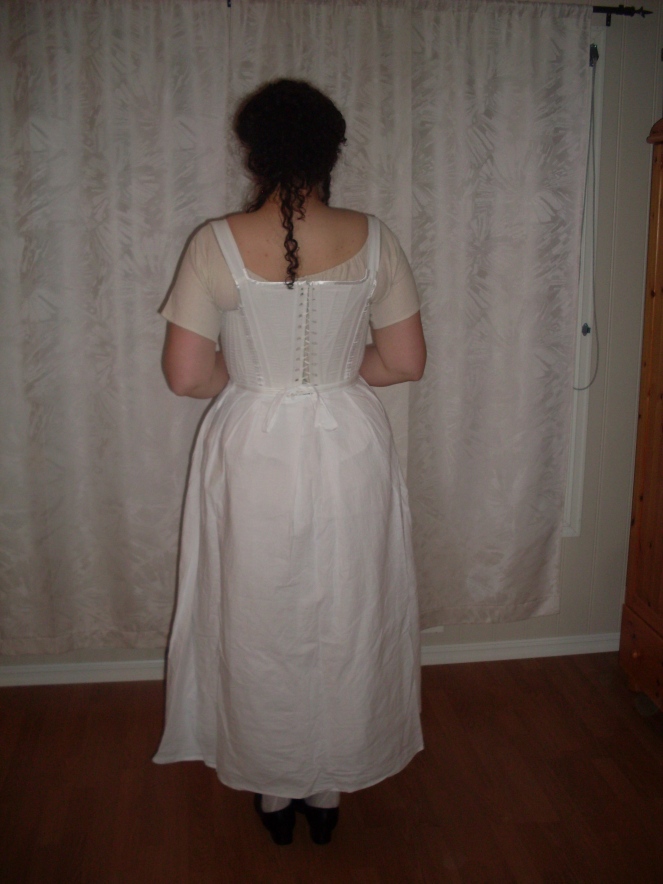 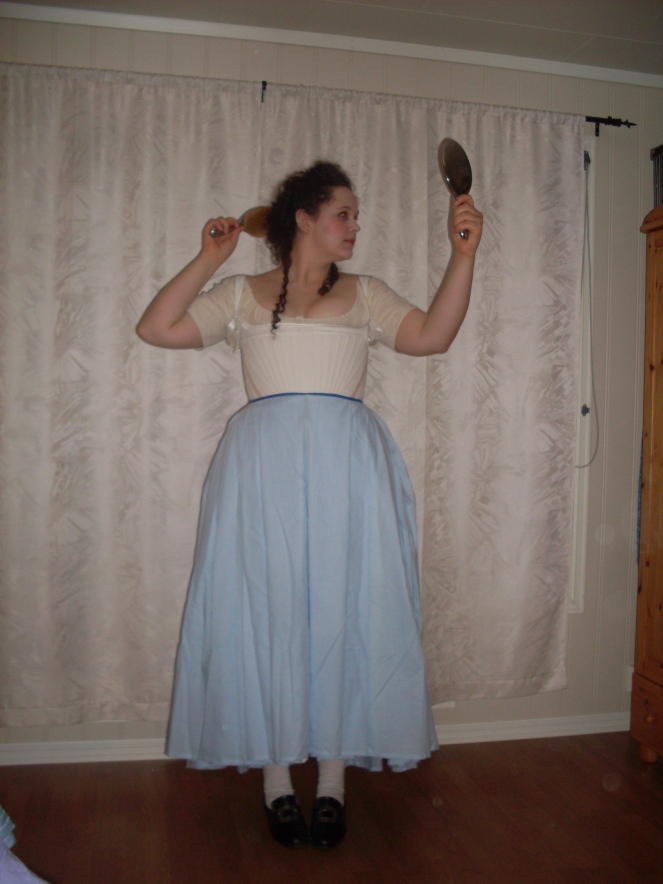 Petticoat number two! Also needs ironing and starching. And to be hemmed better, this one peaks out from underneath all my dresses. 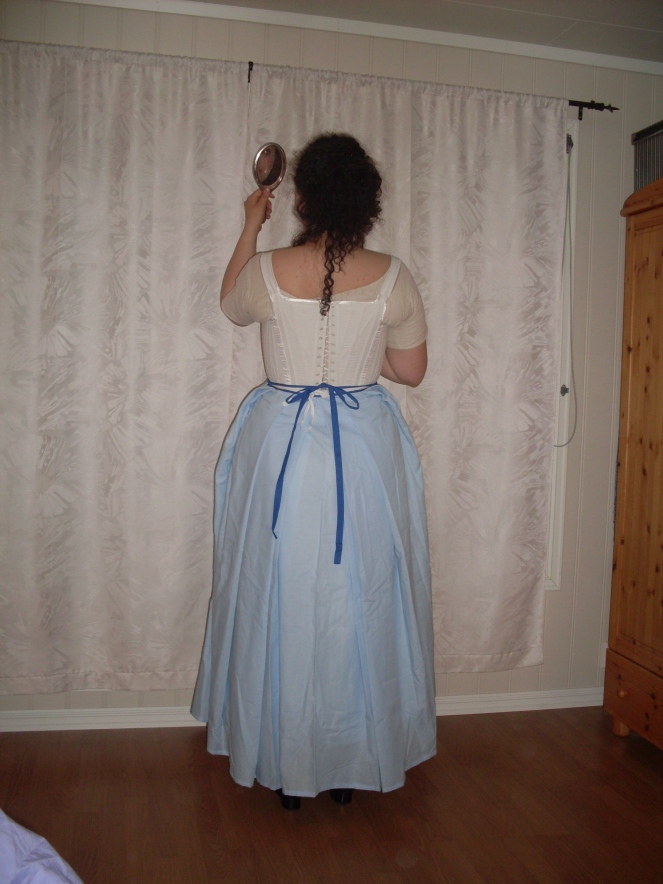 Viewed from the back. Here, I’ve also started posing with one of the better second hand purchases I’ve ever made – a set of silverplated mirrors and brushes. You can find a tutorial for the petticoats here.

On to the dresses! 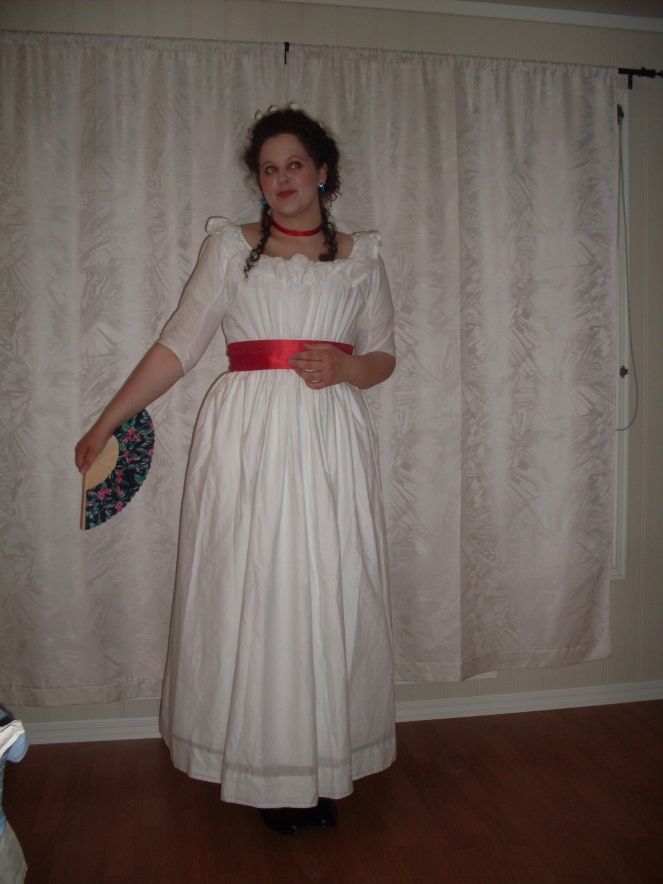 I have already written heaps and loads about my Chemise a la Reine. Here it is, with new and improved length, new and improved sleeves, blue earrings, fan, read sash and a red ribbon around the neck (… an matching red eyes. Sorry about that). Tying a red silk satin or velvet ribbon around the neck was among the more macabre fashion statements – the red line was supposed to remind one of the chopped off heads of French aristocrats. The larp I made my costumes for was set in 1792, the same year as the first guilliotine execution in France… 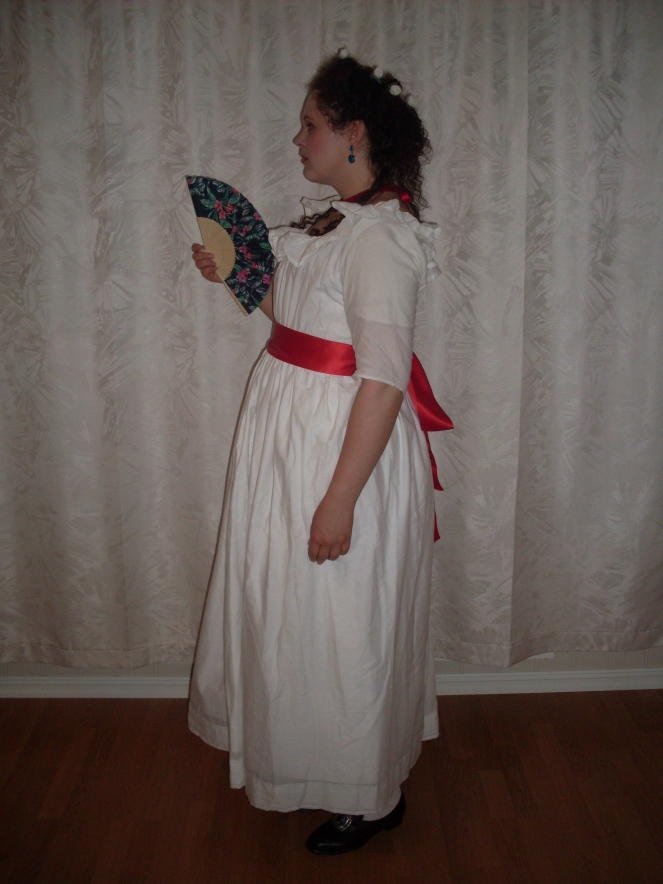 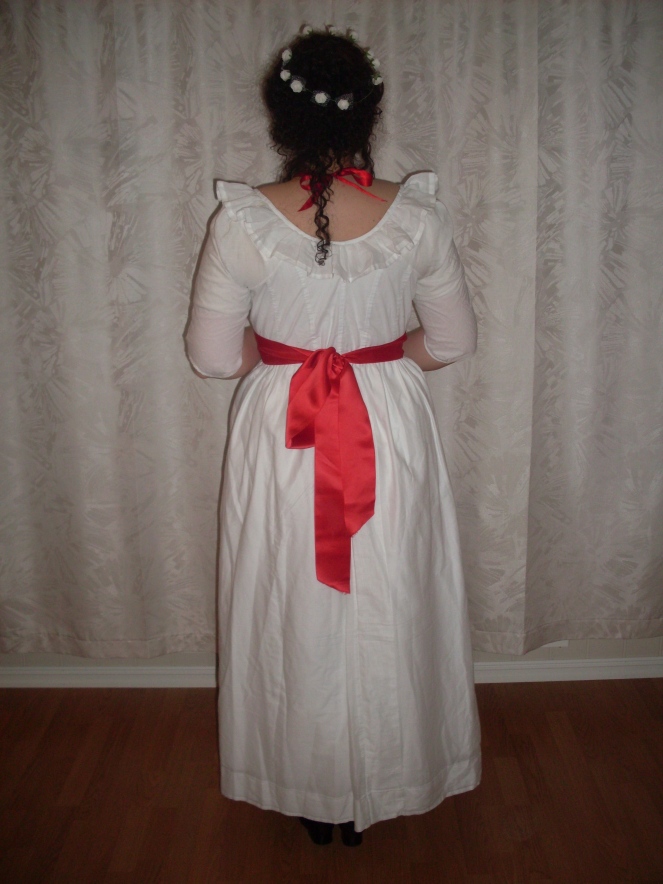 Flowers in the hair is never a mistake. I have friend who’s motto is “If you’re not happy with your hair, there aren’t enough flowers in it”. I like that motto.

The lilac dress has an adjustable closure. I experimented with a “one garment to fit many people”-thing, and the dress has indeed been lent out to a number of people! 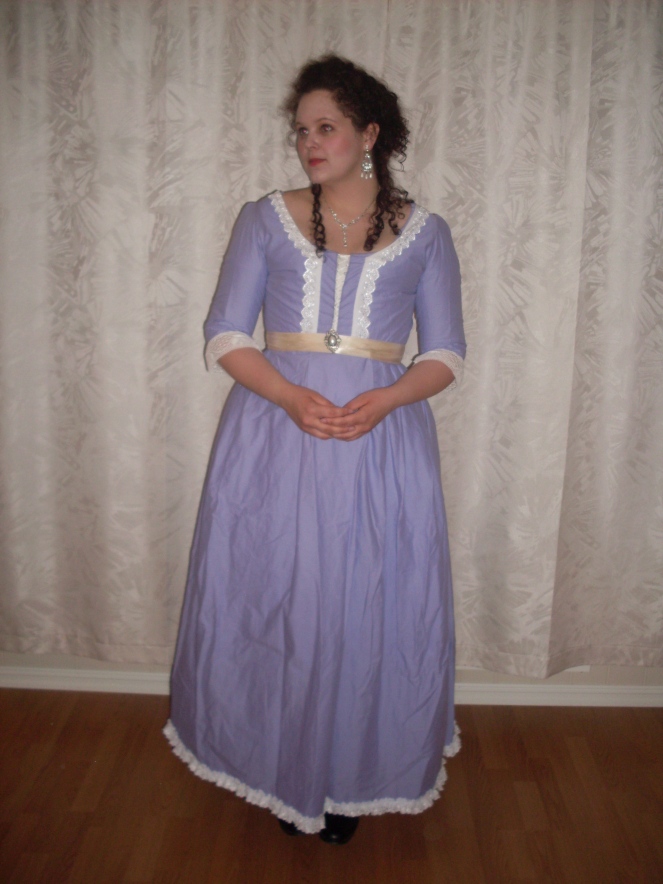 Look at all the lace! I like lace. Lace is never wrong. Lace and flowers FTW. 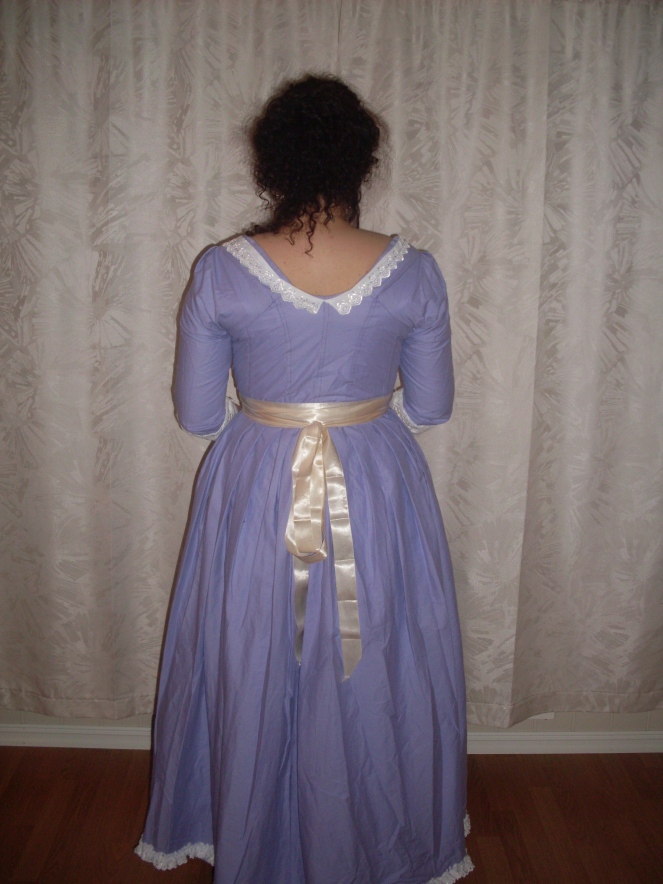 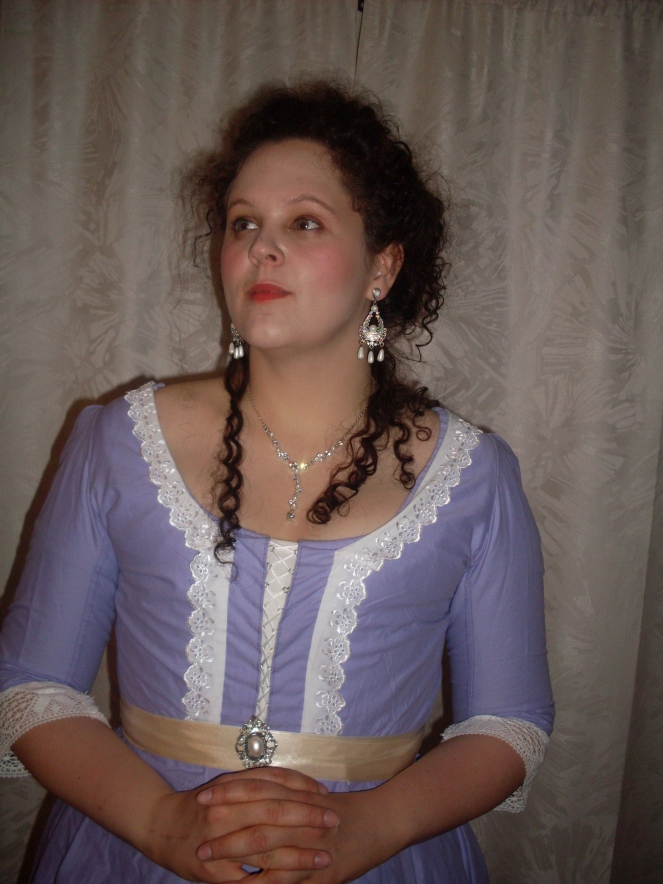 Close-up. A lot of ladies seem to wear broches on their waist sashes, and I like that look!

And with a hat! Wouldn’t want a sun tan, you know. Makes you look poor and stuff. 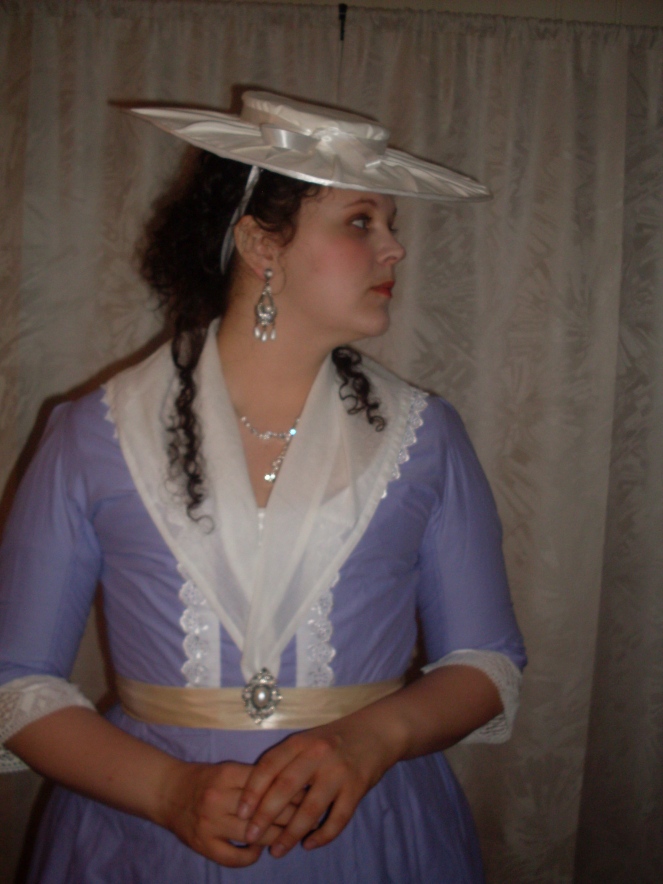 You can read about the so-called bergére hat here. I’ve tied it underneath my hair. 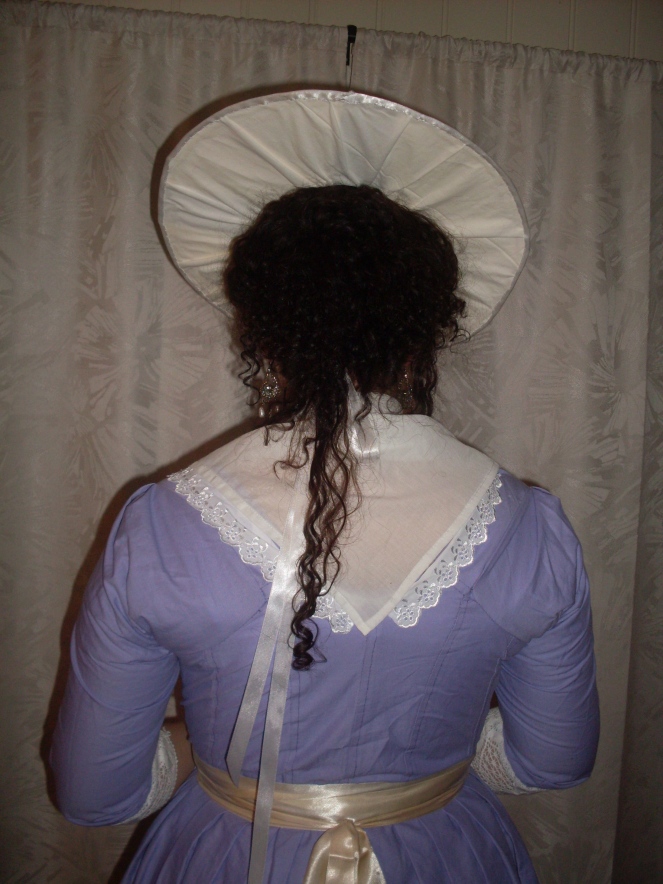 I’ve also added a fichu, made from thin white cotton, to avoid a sunburned neck. Come sun, I defy you!

And finally, my piece de resistance: 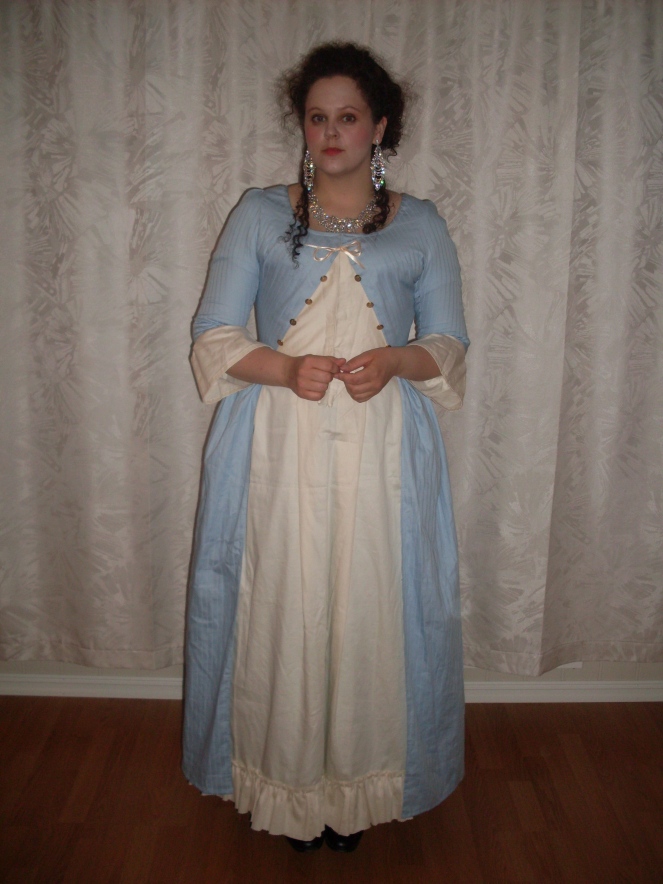 This is made from a bedsheet and a duvet cover, and is blue and creme coloured cotton satin, inspired by this picture: 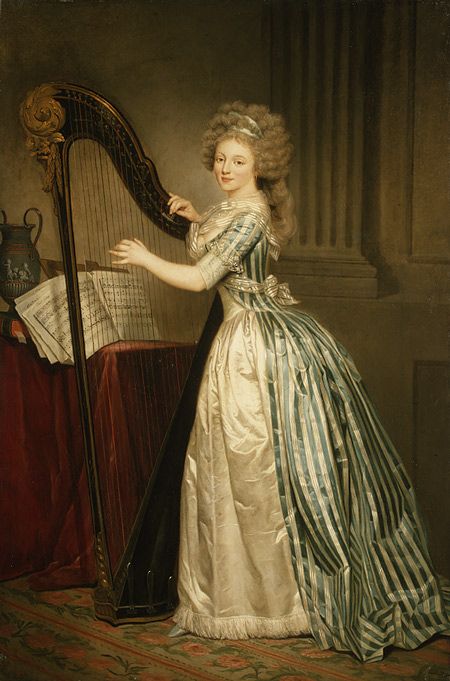 (Rose-Adélaïde Ducreux: Self portrait with harp from 1791, The Metropolitan Museum of Art). 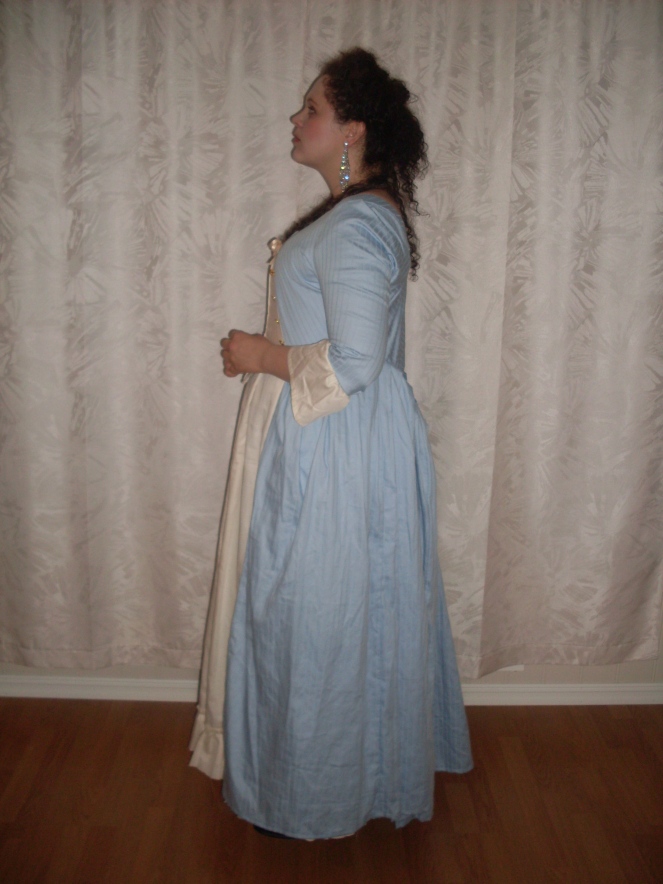 It actually turned out a bit on the large side, but fits well with a sash at the waist. 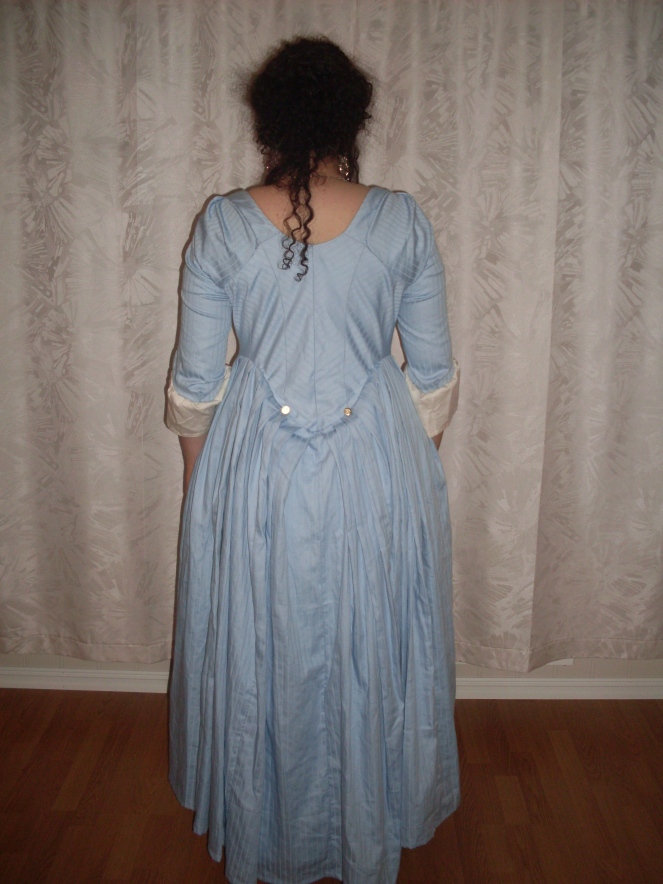 The buttons on the front have no function what so ever. The back buttons do, they are there so I can pull the skirts of my dress up and wear it a la polonaise. 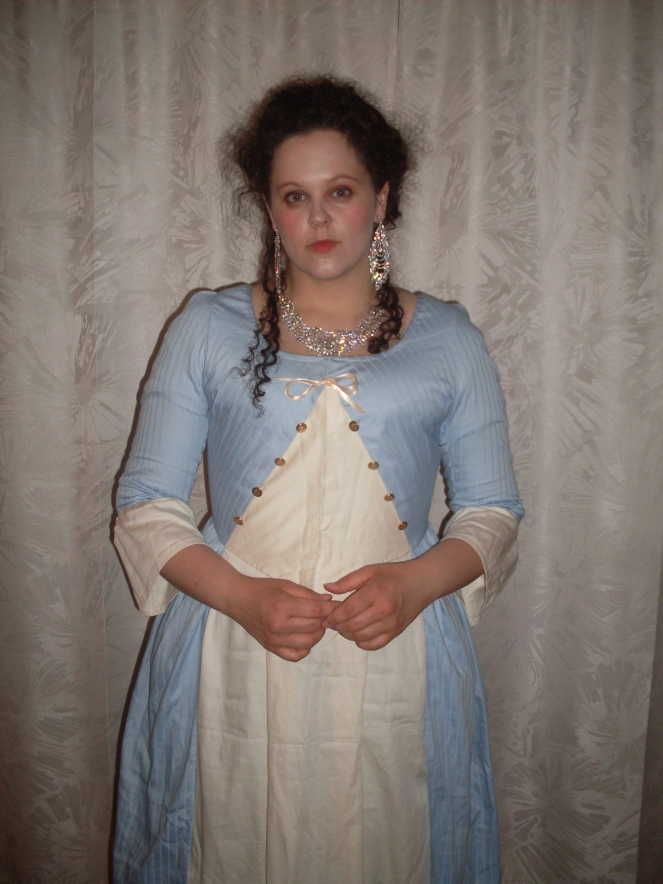 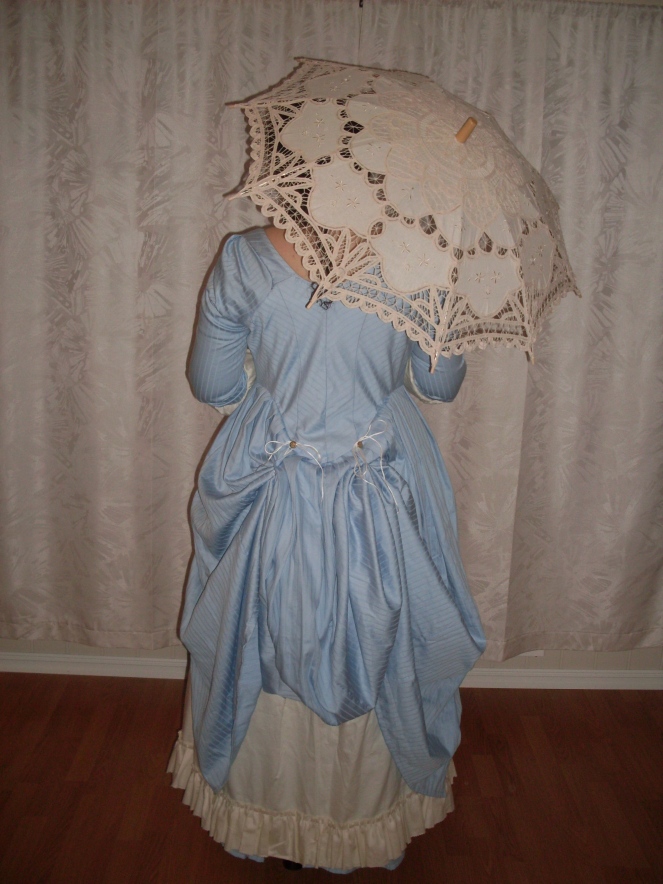 With a parasol – and a la polonaise.